The idea of soft skin is to find another/better way to animate the mesh of an avatar. This is related to the bloodbag researches made some time ago. It is also related to the relation between skin and fasciae in anatomy, see this chapter for more details.

First of all, it is useful to understand the relation between the mesh rendered on screen and the soft skin objects.

Even if they are bounded together, the relation between displayed mesh and soft skin is not a 1-1 relation. In displayed mesh, the edges exists in relation to triangles, and can be neglected. In the soft skin structure, fibers are mandatory to the structure. They are the active part, processing and transmitting forces to dots they are connecting.

The anchors are pullers to arbitrary defined point in space. They constraint the displacement of the dots without being influenced by them or the fibers. In the video soft skin #003 here above, they are represented as red lines.

Fibers have a rest length by default, the distance between the two dots it connects. This length can be modified at any time. At each update, fiber process the delta between the actual distance of the dots and this reference length. If the delta is bigger than 0, the fiber pull or push the two dots to match the rest length. Each dot connected to more than one fiber therefore receive more than one push.

Fibers can vary the rest length by themselves, becoming muscles. This variation is cyclic (sinusoidal), and is defined by these params:

See video soft skin #002 for a demonstration of these parameters' influence.

Dots are simple objects. They holds a XYZ coordinate, a 3d vector to accumulate the forces transferred by fibers and anchors and counts the number of times they've been pushed by frame. To avoid flickering in the dots' position, the force is divided by [push count - 1] before applying the force on the position. After the update, the force not consumed (due to division) remains in the dots, equivalent to an inertia that helps avoiding the flickering. They also hold a 3d vector representing the normal vector of the dot.

Anchor are even simplier. They holds a reference to a dots and a 4d vector representing the XYZ position of the anchor. The fourth component (W) is used as a multiplier when the force vector is computed and passed to the dot.

Fiber are a bit more complicated. At each update, they:

The complete process is done in one pass:

This order prevents inconsistencies between fiber's direction and dots' position during the current frame. It's simplicity ensure good performances, even on complex meshes rendered on small computers.

In godot implementation, fibers and anchors are merged into the same class. All are fibers now. 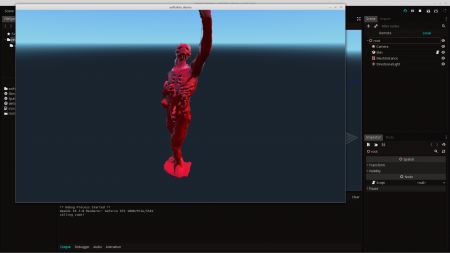 Fascia is a connective tissue wrapping muscles and organs, Their structure is an network of elastic fibers[1]. Not being directly visible but determining the position of the skin, the analogy between the displayable mesh and the soft skin objects is pertinent.

Photos and representations of fibrae.

Thanks to Jacques André for this lead.

Related to superficial fasciae, present in two layers at the surface of the body (see first schema below, superfical and deep fasciae ), just below the skin, the shape of bodies are classified by the predominant element that model it. This classification is called somatotypes[2] 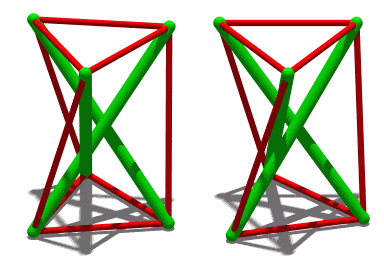